It's never too late, right? 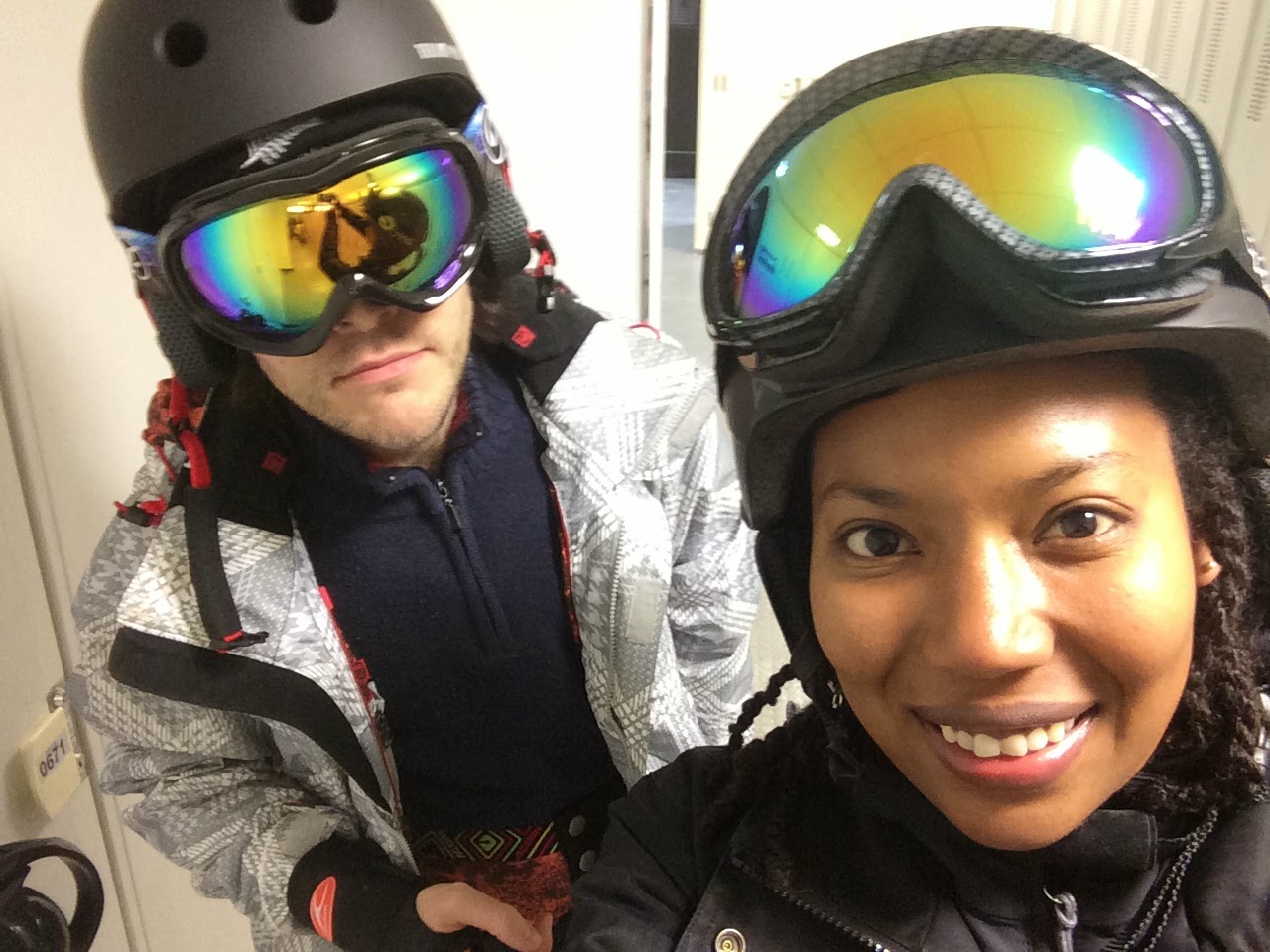 Snowboarding season officially started last Friday here in Muju! Only 3 slopes were open and sadly my favorite, called The Silk Road, was closed. My first day on the snow was Saturday due to shortened operating hours on Friday. It was soooo awesome! My fear was completely gone and I started turning as soon as I strapped on my board as if the 2013/2014 season had just finished a month ago. Soon, I learned that some fear is healthy as I crashed into other riders at least 3 times but the accidents weren't all my fault. I decided to return again on Sunday. Well, I rode the lift to the steepest slope, which wasn't a problem the day prior but now seemed to terrify the pants off me. That feeling put a damper on things until dear Dylan told me that there's an awful feedback mechanism at work wherein confidence begets more and fear makes one more likely to board improperly and feel even less adequate. I took his advice to heart and persisted as confidently as possible and the fear turned to fun again!

Let's take stock of the injuries: skinned my right elbow, a bit of pain on the left without bruising, thigh and butt soreness, both shoulders are sore, the left side of my face and my chin hurts a lot but there's no bruising, so..... life is good!!! I thought about heading back tonight for some night boarding because powder fell last night, but I've still got some planning to do for my winter camp. I'm going to do some night snowboarding tomorrow night.

To conclude, if you're going to try snowboarding invest in wrist protectors, knee guards, butt protector, goggles and a helmet! I can't wait to get back on the snow! 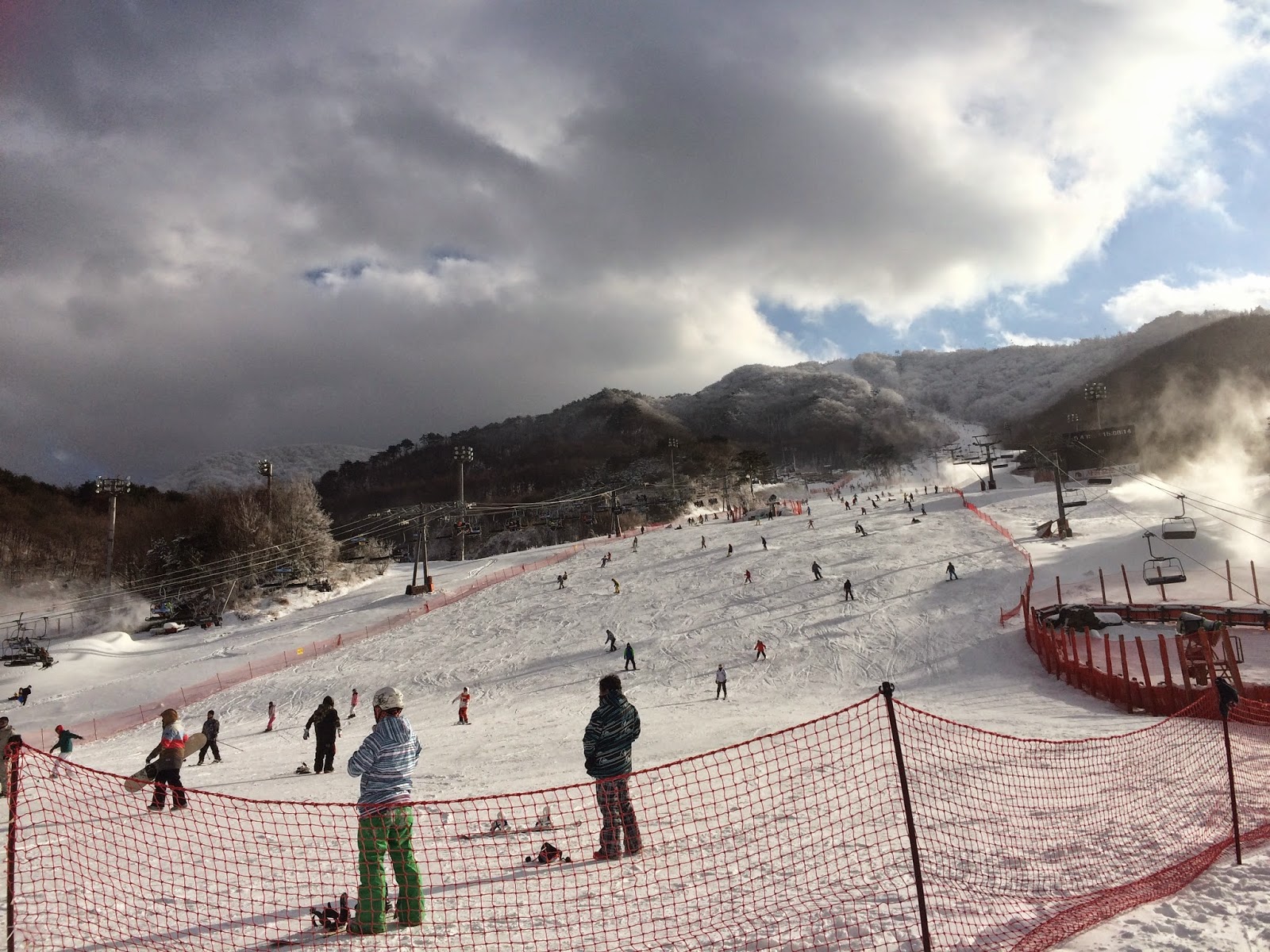 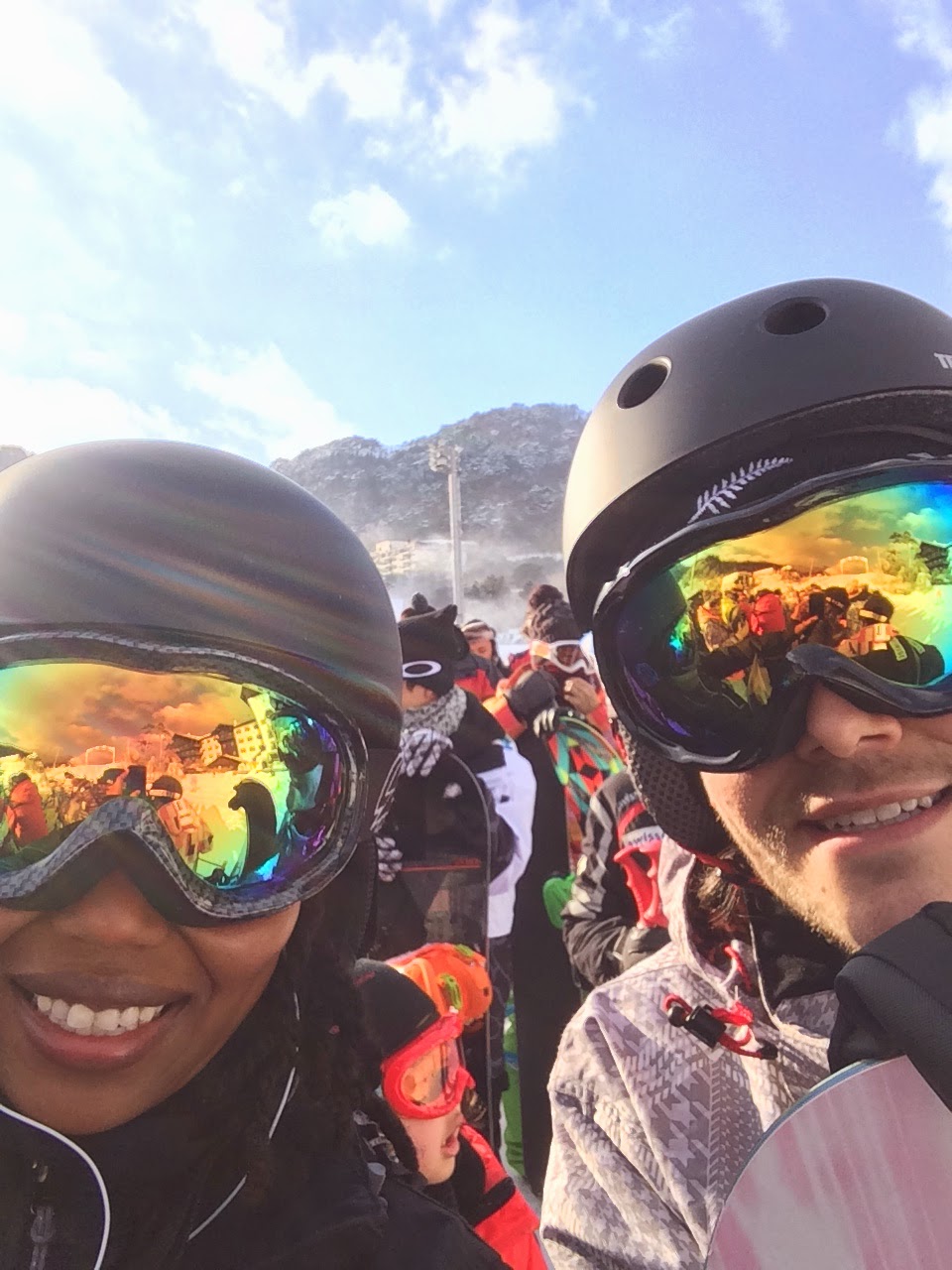 Waiting in line for the "Boat" lift

A Review of Air Asia

I've recently had "an experience" with Air Asia that ran the complete gamut from elation to despair then to cautious optimism.

At first, I loved this budget airline because they offer the cheapest fares to CNX Chiang Mai, Thailand and DMK Bangkok, Thailand out of ICN the Incheon Airport in Seoul, South Korea.

Budget Airlines get you with their "fees" for checked luggage, food, seats, insurance and special "comfort items."

Meals are 5,400krw ($5) and a drink with dessert is an extra 3,000. *rolls eyes* We opted for one hot meal each. They have 1 vegetarian option! Woot!! I don't mind packing some extra oatmeal and dried fruit for the 5 hour flight to Bangkok.

We're only checking my bicycle as "sports equipment" 45,000krw from ICN to DMK plus 16,000krw for the flight from DMK to CNX, Chiangmai. Luckily we don't have to recheck the bike, because Air Asia has a hasslefree connecting flight policy!!

Air Asia also has a great policy for checking sports equipment. For bicycles:

ABOVE TABLE IS TAKEN FROM THE AIR ASIA WEBSITE

I travel and live like a pauper, but I splurge on fruit, vegan food and experiences. :D

And the e-mail continues....

In the event of such a flight rescheduled, you may also choose from the following options :

a) Move flight : Change to a new travel date on the same route within 14 days from original flight date, without additional cost, and subject to seat availability.

b) Credit shell : Retain the value of your fare in a credit account for your future travel with AirAsia. The credit shell is valid for 90 days after it has been issued.

So this meant that the first flight was okay but our second flight had been rescheduled to depart way BEFORE we leave Incheon on Jan 10th. Moving the flight seemed reasonable until we discovered that there was no contact information in the e-mail!! However, there was a link to an e-form, which I promptly filled out after checking the website to find another flight leaving DMK for CNX an hour after we anticipate arriving in Bangkok.

Somehow I felt like that wasn't enough and actually wanted to talk to a human! We searched the AirAsia and found a bizzare phone number that only works when using a landline, which we don't have at home. ㅠㅠ Before realizing the number was only accessible via landline I tried every variation of the 15 digit number. ㅠㅠ The next day I called Air Asia at Incheon Airport. The rep I spoke to told me to fill out the e-form and I also asked him what was wrong with the customer service number. He replied that it was an international number.

I later contacted Air Asia through their Facebook page. A rep replied to my message within 10 minutes and also told me to fill out the form. Later in the day, after he called, Dylan who said that they had already moved the flight by the time he got on the phone, but the Air Asia team hadn't sent the confirmation e-mail yet.

To conclude, I received this e-mail on Oct 21st and it was resolved by Oct 23rd. I think that's a decent resolution time, but in the age of the internet, smart phones, and speed it was very stressful torture to deal with. I still like Air Asia, because our return flight to Korea was even cheaper than the flight to Chiang Mai, and this flight includes checking my bicycle, a 20kg bag and 2 meals. The round trip flight expense was less than $1,000. A little stress is worth it for this kind of savings on a nice vacation. I'd recommend using caution and being flexible when booking a flight on this budget airline. 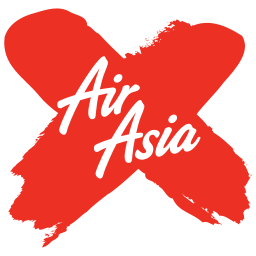 I'll write another review after we've actually flown with Air Asia.
Posted by Unknown at 3:25 PM No comments:

Why am I writing a blog?

The few days of holiday last week were great and I savored and enjoyed every moment. really! chincha! 친차!! (that's for you MsAfromSA)

I noticed over the past few days that without goals or a basic plan, this blog will surely crash, burn and fail. Therefore, I need an ever expanding guide.

Why am I writing a blog?
I'm writing to be the change I want to see in the world, find passion, and serve anyone willing to read or watch my videos. I'm hoping there are people, even if only 1 or 2, who will resonate with my cheap, active, vegan life. . . my way. If not, I hope to plant a seed anyway.

Things I want to write about and make videos about:
1. Easy homemade soaps
2. Quick and easy recipes
3. Shopping (for sustenance and in general)
4. Vacation in Thailand...recommend restaurants, hotels, things to do, etc
5. Exercise!!!
6. The easiest way to style coily hair.
7. How to be cheap and live cheaply
plus more

Durianrider one of the most inspiring people on youtube

An iphone 5s is in my future!!! I'm upgrading from my 5.5 year-old iphone 3g. The 5s is for photos, videos, strava.com rides, and most importantly spreading the minimalist vegan message.

My goal for today is to make an exercise youtube video: How many squats can you do in 1 minute?

This photo is just for the effect. I'll change it to one of my own later and add my video to this post too.

I had an insanely productive day, but I've run out of time.

It's Hangeul Day, here in Korea. Hangeul is the alphabet used to write the Korean language, therefore, Hangeul Day is a celebration of the Korean script, which is very clever.

I spent a lot of time in the morning on tripadvisor.com, agoda.com, maps.google.com, and strava.com. My excitement for my holiday in Thailand is growing rapidly. Just the day before yesterday, we bought our tickets, which totaled under 1 million korean won (<$1000) for both of us on a budget airline called airasia. I've already paid for my bike to accompany me on the adventure.

I considered buying a device for taking pictures, mapping my rides and runs, making videos...an iphone? Do I really need a garmin? It's so nice to see power and heart rate along with other evidence of training on strava.

Indeed my excitement for life is a physical entity within me that I can feel in my body as eminating from me yet essentially drawing its power from the world. Exactly one month to continue training for our next scheduled half marthon race and one week from that day we'll endeaver to accomplish a feat unknown to our minds or bodies. . . the marathon. Snowboarding season should start soon after this run if not before. We are runners for life, so we'll decrease our mileage in winter to 800 meter fast sets 3 times a week with a substition of 5km from time to time. I'll find a way to ride my bike as much as possible. Only icy or snowy days will make me give up flying down the hill to the bus terminal.

Dylan and I ate potato fries, ttukbokki, and kalkuksu for dinner at Attal a restaurant run by one of my coworkers. We had an interesting conversation regarding a recent "interesting jobs" post on reddit about a guy who works for a company that donates fruits to food banks. People with fruit trees in their yards sign up to have someone, or this guy, come over to their house to pick the fruit. Perhaps they won't eat all of the fruit or some other reason and instead of letting it rot, they donate the life enhancing fruit to other people in need. The interesting part is that the company picks 1,400 tons of fruit every year!!!!!! I thought this was a flipping fantastic idea! Some people are so kind and wonderful! I want to keep a record of this conversation because one of my dreams is to run an organic shop in New Zealand.^^ Perhaps I could offer to pay people for their unwanted fruit. If one doesn't exist already, I'd like to setup a company that does exactly this sort of wonderful work there. If one exists, I'd probably join it.^^

Our evening ended with a viewing of an intriguing and utterly fascinating movie named, Lucy. What if we could harness 100% of our minds? The theme is similar to Transcendence. I loved it! Choi Min-sik (from Oldboy) was amazing! He's the best badguy. The movie was bizzarre, graceful and beautiful. 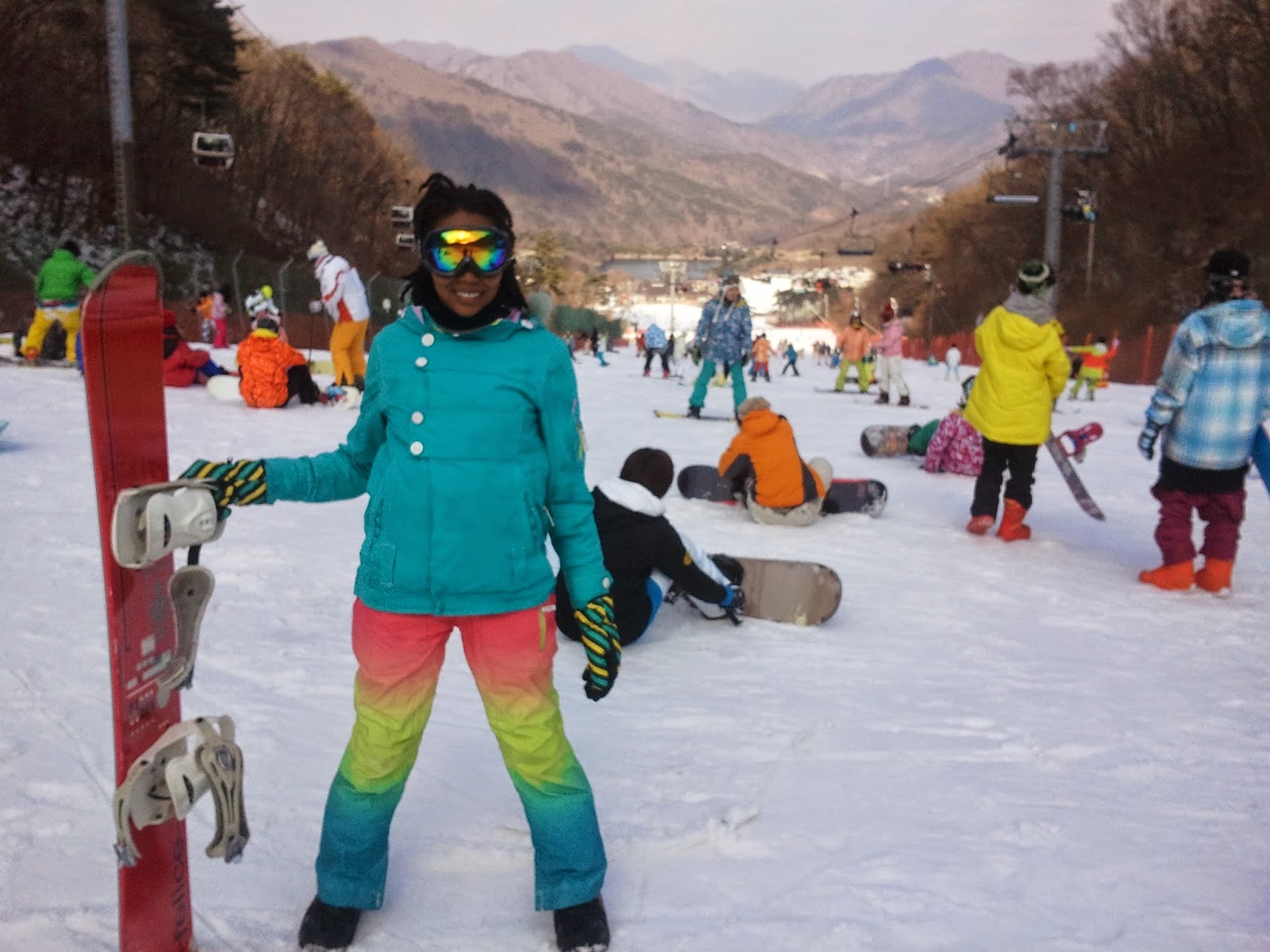 December 7th 2013 at the Muju Resort in skishop rented gear

The first of my daily posts

I've just been inspired to action by a TedTalk. . . how? why?

How to find and do work you love: Scott Dinsmore

Here I find myself. inexplicably on fire. I want to find my life's purpose and do it, live it, breathe it, so I will write. . . until a pattern I cannot ignore develops into an unstoppable force of passion. What do I have to lose?

Can I turn any of this into a career?
Posted by Unknown at 8:05 PM 1 comment: